“Every $1,000 increase in housing prices, costs 1,900 households in Iowa,” Lance Henning, executive director of Greater Des Moines Habitat for Humanity, told a recent symposium on affordable housing. “When you think of all the people trying to move into housing there…[the increases] assess the people who work in our community.

Last week, the average rate for a 30-year fixed-rate mortgage was 5%, according to Freddie Mac, the federally chartered mortgage investor. This is the first time in more than a decade that mortgage rates have reached 5%.

At the beginning of January, the average rate was 3.2%. The jump to an average rate of 5% was the fastest three-month increase since 1987, according to data from Freddie Mac.

Rapidly rising interest rates are adding hundreds of dollars a month to mortgage payments at a time when the cost of food, gas and other items is rising. (The Federal Reserve is raising rates as it tries to rein in inflation).

In the Des Moines area, as well as nationally, the supply of single-family homes for sale is limited, according to association data. In March, only 1,702 residences were put up for sale. For comparison, in March 2020 there were 3,487 listings in the Greater Des Moines area.

Of the 1,702 single-family homes listed for sale in March, about 850 were new construction, said association president Jen Stanbrough.

“Some of these new construction homes are just at the foundation stage or haven’t even started construction,” she said. “When you divide those numbers…it really reduces that inventory number. … It gets a bit frustrating for buyers.

Buyers who may have been prequalified for a home loan but have had difficulty finding a home to buy may see the interest rate offered for a loan expire. Higher interest rates could affect the size of a home loan they qualify for, meaning a bigger down payment or finding a cheaper home, property experts said.

Rising interest rates “affect people who are trying to become homeowners,” said Rachel Flint, vice president of Hubbell Homes Inc. “When rates go up, they may no longer qualify for that home loan because rates have changed.”

“I think we’re going to start to see some loan products in lenders’ portfolios that haven’t been used in a while,” she said, citing adjustable rate mortgages and falling rates. of interest. “There are tools in our toolbox that we can also pull out and use to help buyers.”

Highlights from the association’s reports of home sales in the Greater Des Moines area, which includes Polk, Dallas, Warren, Jasper, Marion, Madison and Guthrie counties, include: 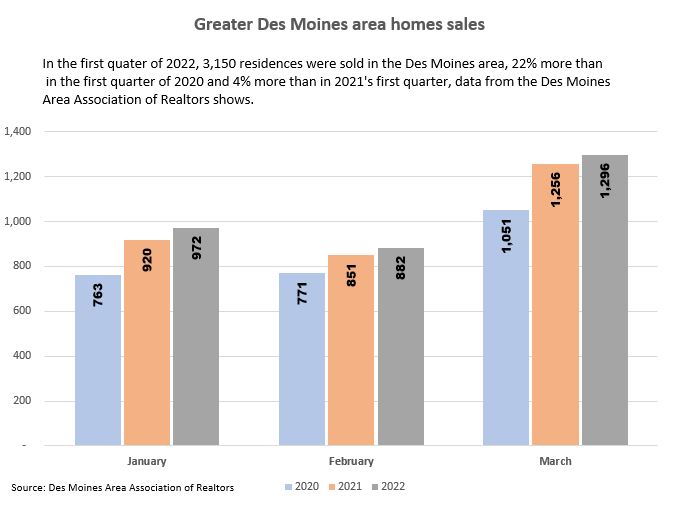 Powell: The Fed will continue to raise interest rates until it gets inflation under control