Markets were expecting Powell to turn dovish and talk about the Fed taking a break from raising interest rates. The Fed rose 75 basis points as expected, and the financial world waited for the Fed’s press release. He came out and things looked great initially.

This line in the FOMC statement got people excited:

To determine the pace of future increases in the target range, the Committee will take into account the cumulative tightening of monetary policythe lags with which monetary policy affects economic activity and inflation, and economic and financial developments.

The Fed is essentially saying that it acknowledges having taken interest rates quite high, close to their 2023 median rate of 4.6% (which is now higher!). The markets saw this as a good sign that interest rates would soon peak.

Here is how the dollar reacted: 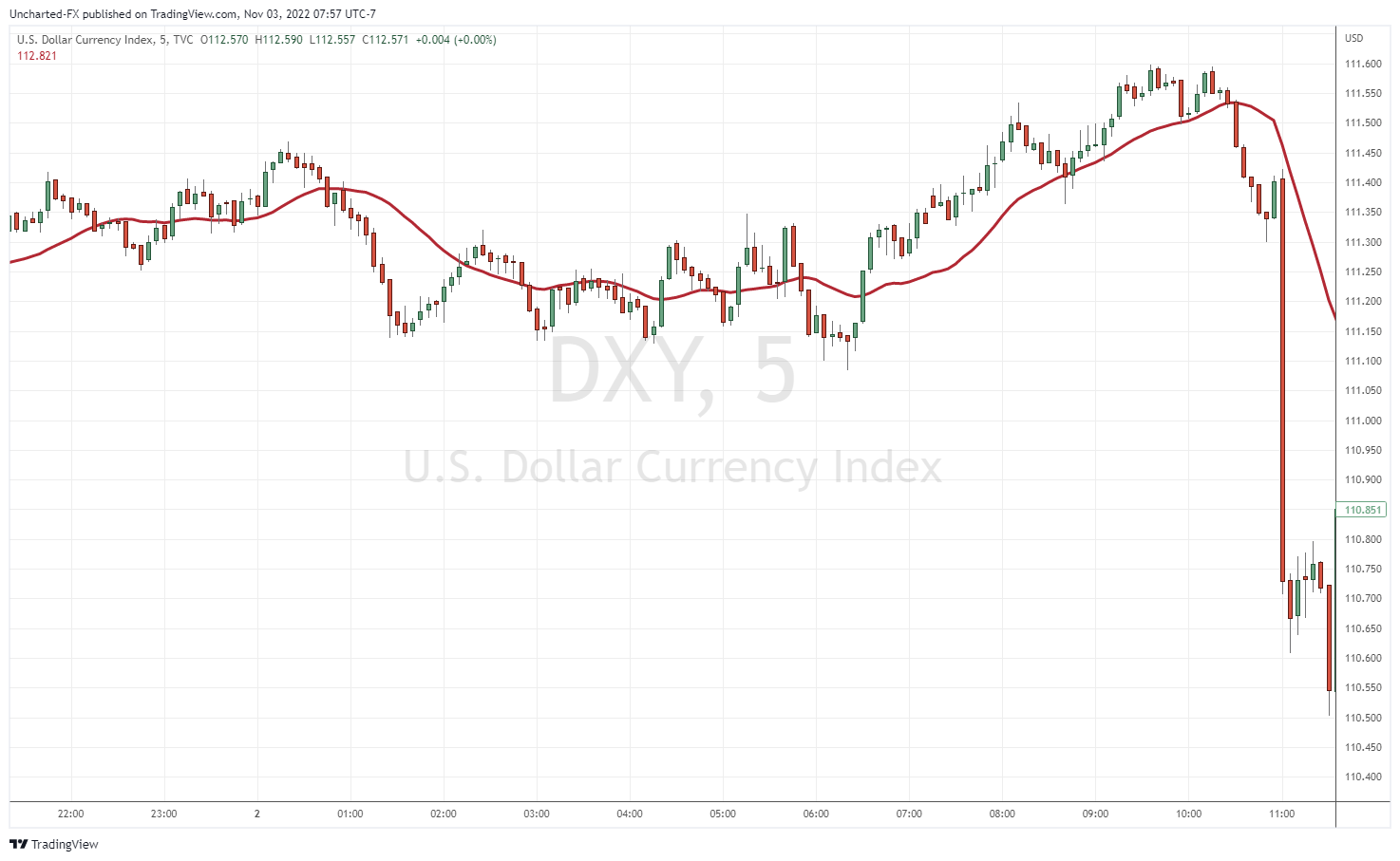 However, by the time Fed Powell gave his press conference, here’s how the stock markets ended: 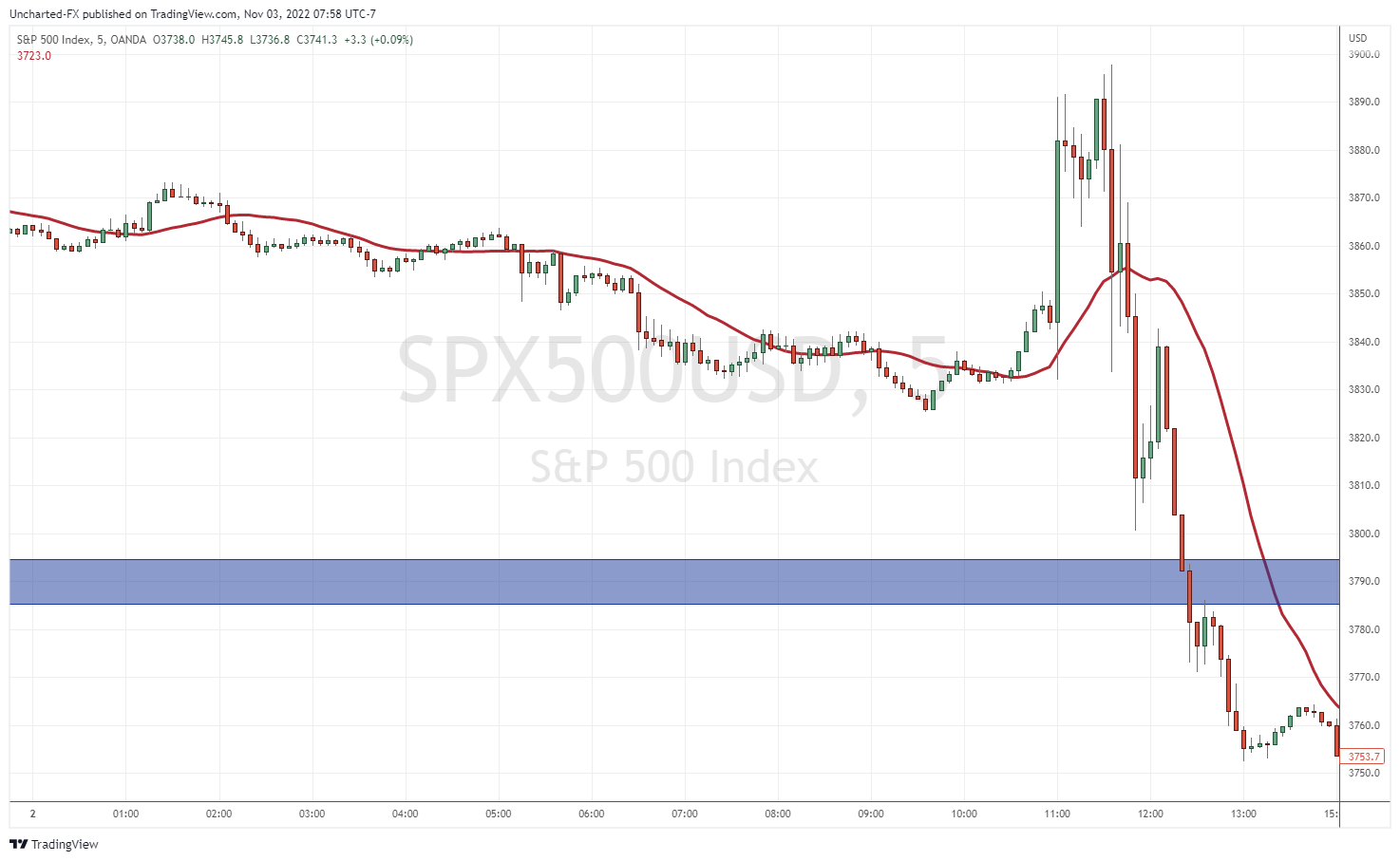 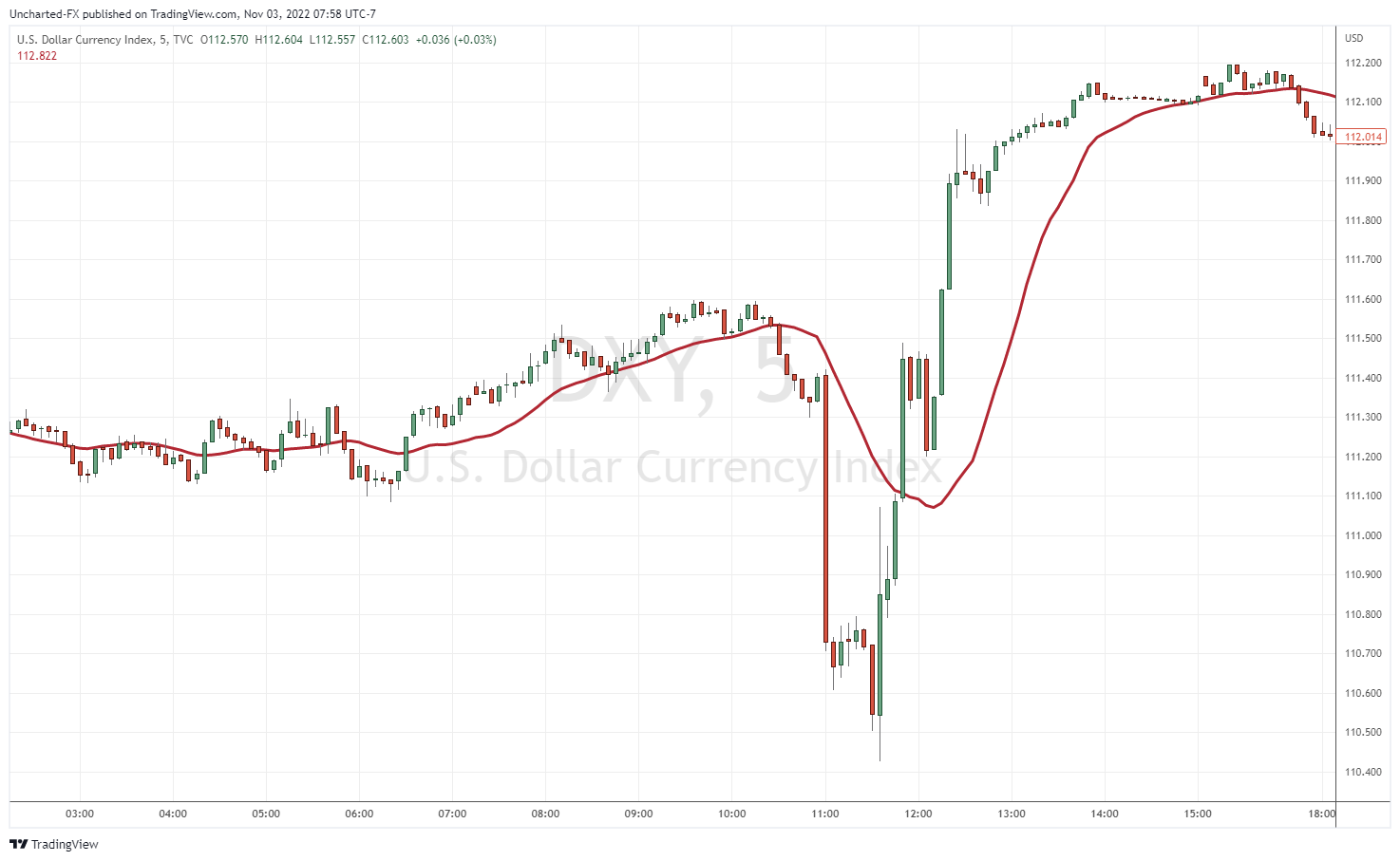 If you haven’t watched Powell’s press conference, I suggest you do. It was painful to watch. Journalists kept asking questions about a gradual Fed cut or whether interest rates were going to halt or slow. Powell responded diplomatically and said the fight against inflation was not over.

The good news? Powell said the Fed could slow rate hikes in December or January.

“As we get closer to that level and get deeper into restrictive territory, the issue of speed becomes less important. … And that’s why I’ve said at the last two press conferences that at some point it’s going to be important to slow down the pace of increases. So that time is coming, and it may come as soon as the next meeting or the one after. No decision has been made,” Powell said.

Powell in previous meetings said the labor market is robust and showing strength. He continues to see this in the data. A true case of softening cannot be made. This is why the US non-farm payrolls (NFP) or employment numbers have become very important data points. And we have NFP data this week on Friday November 4th.

Essentially, the markets were expecting a dovish Fed, and that’s what was apparent from reading the FOMC report. But that changed at Powell’s press conference. The markets did not expect a decidedly hawkish tone.

Now, markets expect the Fed to raise funds to a high of 5.05% before halting its current rate hike cycle.

In my humble opinion, there was no accommodating attitude in the Powell conference. Rates will continue to rise. Powell even defended this by saying that if the Fed accidentally tightens, it has the ability to lower rates to adjust.

This then opens the debate about inflation: is it due to excess money printing, supply chains, etc. If it’s supply chains, then raising rates can’t really do much. This is why I focus on inflation as a monetary phenomenon, and unfortunately I see more inflation coming as governments continue to spend heavily.

My readers know the drill. A chart I looked at is the 10 year return: 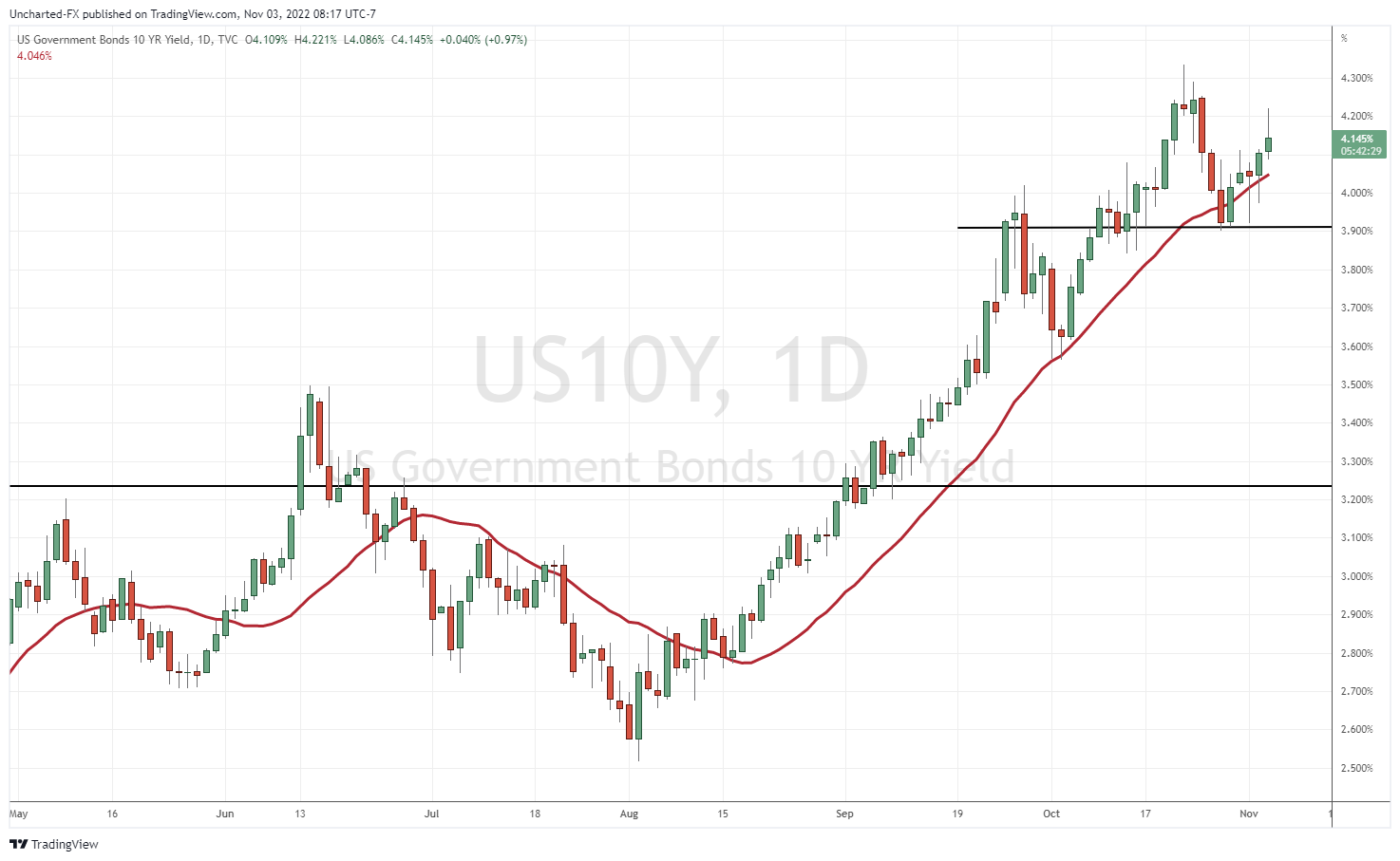 It continues to hold above 4% and rose sharply today, putting pressure on equity markets. When this begins to decline, we can expect stock markets to rise. 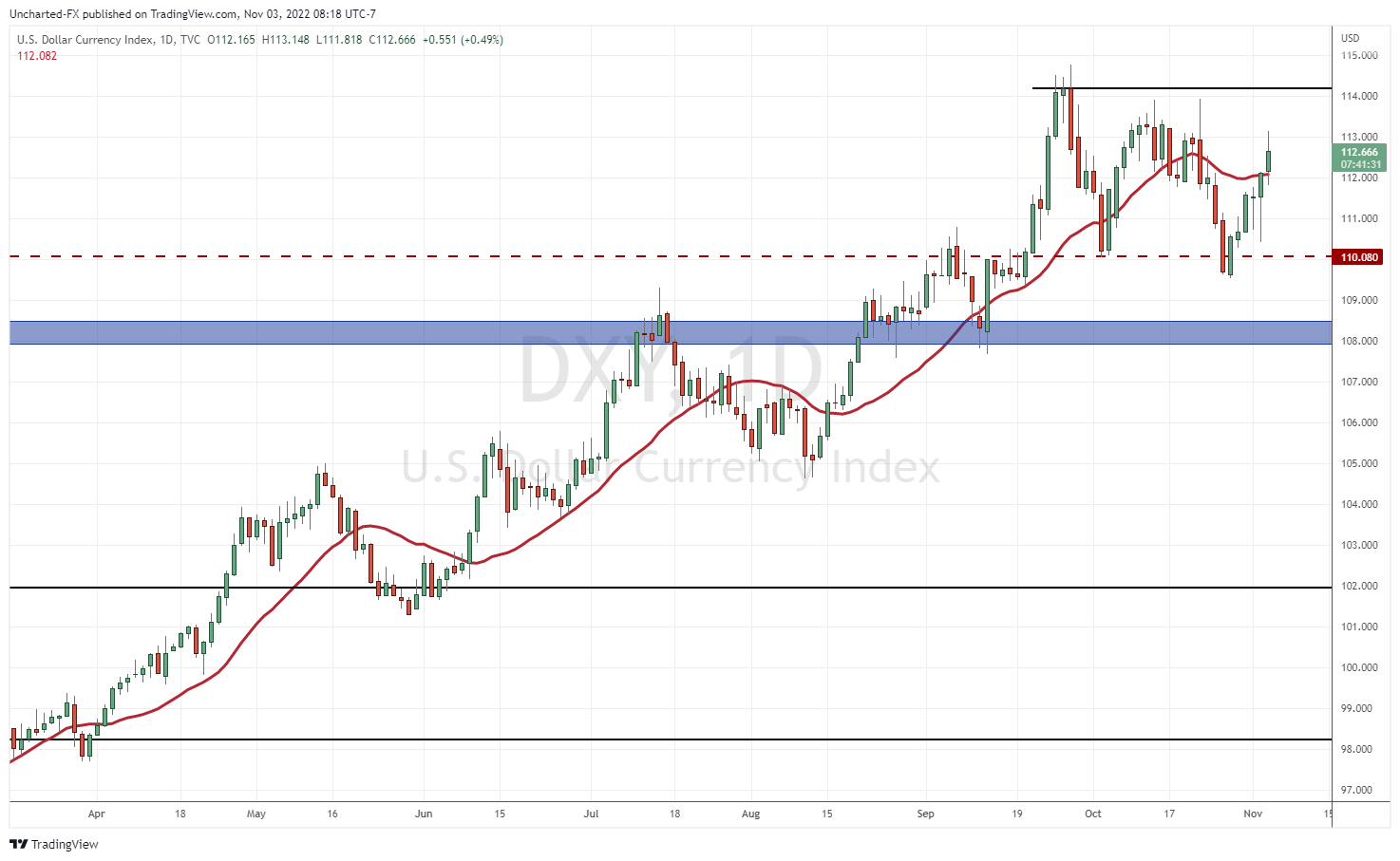 The dollar also continues to maintain its bullish trend. Readers know that I expect the US dollar to be the best performing fiat currency. It will continue to do so, adding inflationary pressures to every other nation in the world as their purchasing power declines. This will put even more pressure on central banks and their ability to actually do something about inflation. 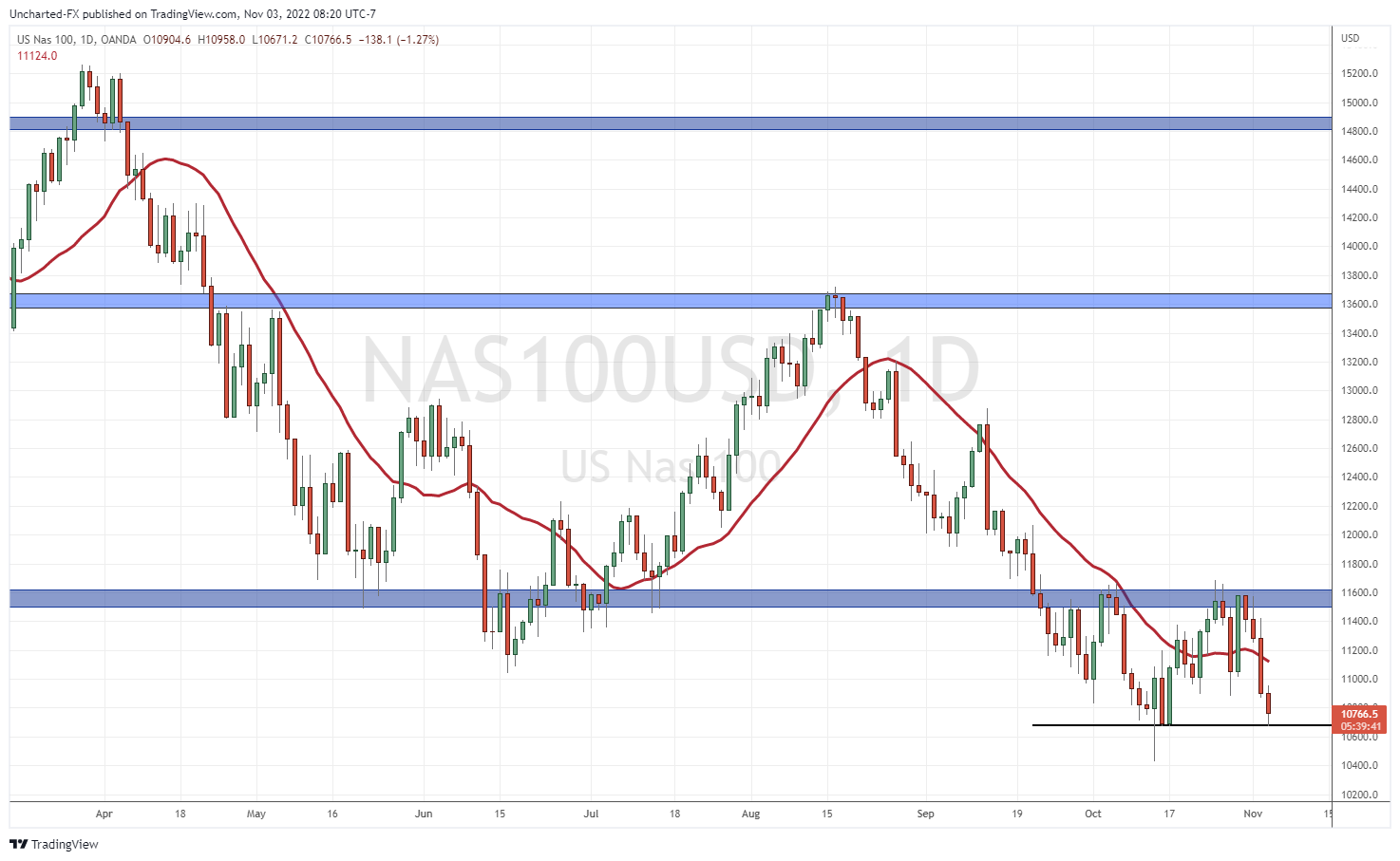 US stock markets fell sharply and surpassed their previous breakout levels, signaling the end of the momentum. Now we see if the markets are collapsing. The Nasdaq is likely to break below recent lows and continue its downtrend. Or, it may rebound and extend here, or rebound and move back above 11,600 on the road.

Tech stocks are feeling more pressure from rising interest rates, as most of them are not generating income. They borrow money. Debt becomes more expensive as interest rates rise, eating away at their financial statements. 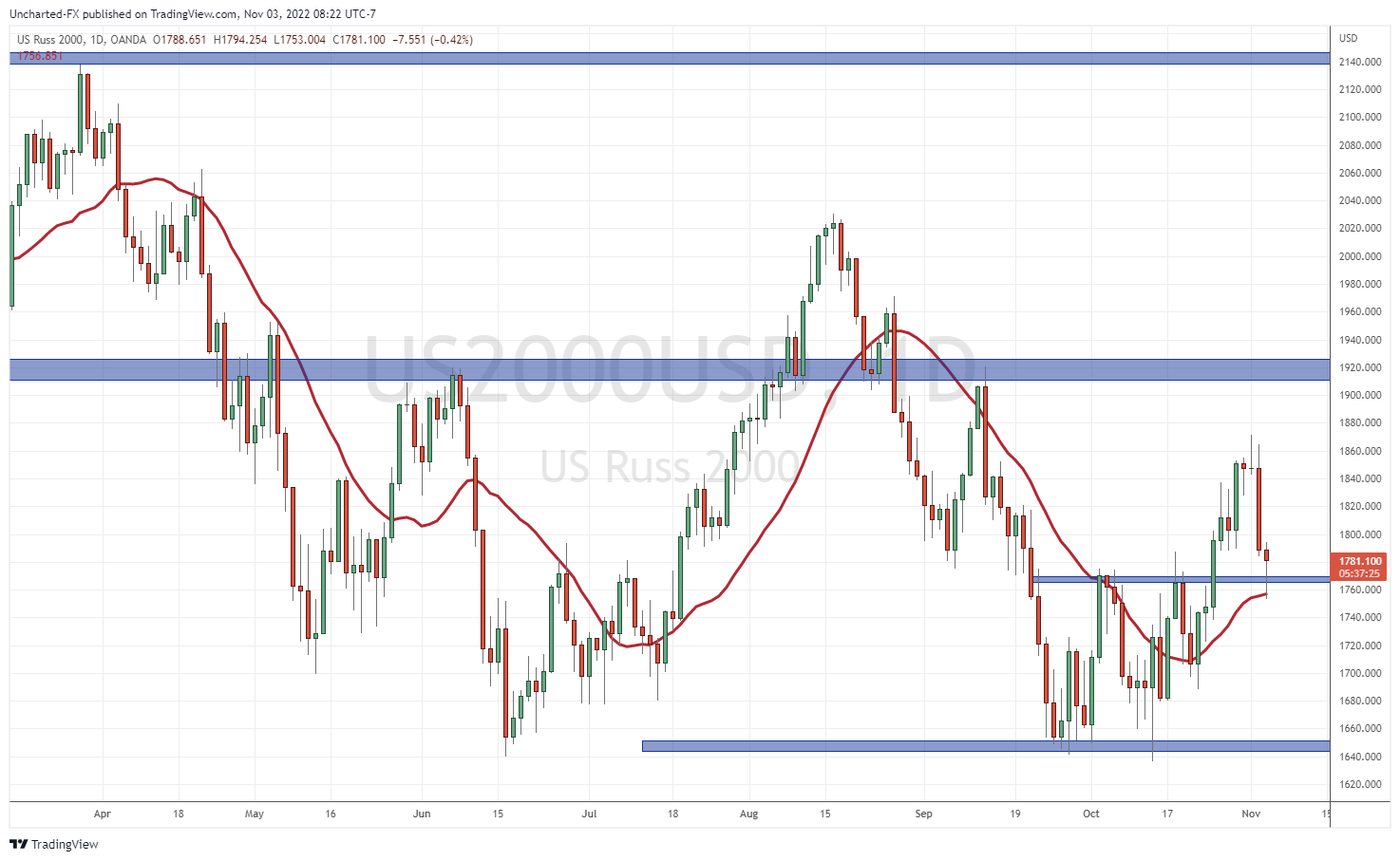 But let me leave you with some hope. The US small cap index, the Russell 2000, is what I use as a leading indicator for the three major US indices (S&P 500, Nasdaq and Dow Jones). From a technical standpoint, the Russell is just retesting the breakout zone at 1760. The uptrend remains intact as long as the Russell holds above that.

If the Russell is in the lead, it’s a good sign for a stock market rally. This, along with the US 10-year yield, will be the chart I will watch the most.

So, in summary, a Fed pivot is still pending. Interest rates should rise, but perhaps at a slower pace. If inflation data shows months of declines, that would be a good sign that the Fed and other central banks are winning the battle. But right now we don’t see that and we could be waiting a while.