Can interest rates go down?

Global stock markets rebounded on Monday and Tuesday. Why? New quarter, new start and anticipation of a potential pivot in Federal Reserve policy.

Fueling the pivot narrative is evidence that the global economy continues to slow. ISM manufacturing data missed expectations, posting 50.9 against expectations of 52.2 and a previous reading of 52.8.

Although this figure is still above the 50 mark that separates growth from slowdown, the chart below shows that new orders and employment are both in contraction territory at 47.1 and 48.7 respectively. 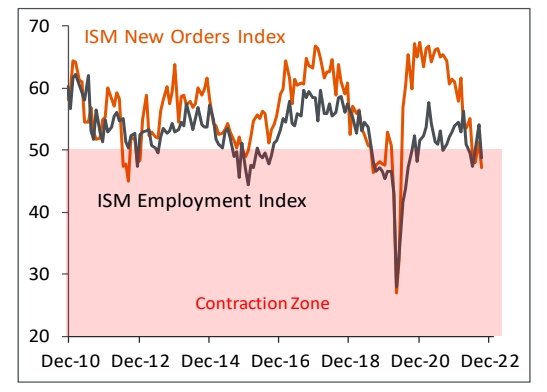 “The U.S. manufacturing sector continues to expand, but at the slowest pace since the pandemic recovery began. After four straight months in which the panelists’ companies reported falling new order rates, the September index reading reflects companies adjusting to a potential drop in future demand.

Slowing demand is a theme we highlighted earlier in Are You Paying Attention? Global demand is collapsing.

However, the employment situation is holding up. Fiore noted: “Marantly absent from the panelists’ comments was any large-scale mention of layoffs. This indicates that companies are confident about near-term demand, so the main objectives are to manage mid-term workforces and supply chain inventories”

It’s all an interesting dynamic. Employment is a notoriously lagging data point. Companies generally don’t like to lay off staff until it’s absolutely unavoidable, but that’s precisely what the Federal Reserve is looking for to break the inflation loop.

Demand appears to be slowing rapidly and the financial system has clearly been under strain lately. We have seen interventions in the foreign exchange markets in Japan and China. The Bank of England also had to step in and rescue pension funds with a temporary QE (open market operation) to support the UK bond market.

What is your sentiment on the GBP/USD?

Vote to see the sentiment of traders!

The UN and the IMF at loggerheads over inflation

To add to the confusion, the IMF is urging central banks to do more to ensure inflation doesn’t spiral out of control, while for some reason the UN steps in and asks the Fed and others to relax on the way to hiking.

UNCTAD Secretary-General Rebeca Grynspan said: “There is still time to step back from the brink of recession. We have the tools to calm inflation and support all vulnerable groups. But the current course of action hurts the most vulnerable, especially in developing countries, and risks tipping the world into a global recession.

Central banks are well aware of these risks. The Fed forecasts higher unemployment and weaker economic growth. A recession is the likely price of controlling inflation. The only question is how deep the recession will be. President Jerome Powell all but confirmed that was the case after the last meeting.

He said: “We have always understood that it would be very difficult to restore price stability while achieving a relatively modest increase in unemployment and a soft landing. We need to put inflation behind us. I wish there was a painless way to do this. There are not any.

“Nobody knows whether this process will lead to a recession or, if so, how deep that recession would be. The chances of a soft landing are likely to diminish as policy needs to be more restrictive, or restrictive for longer.Nevertheless, we are committed to bringing inflation down to 2%.

The UN fears that by tightening too much, developed countries will renege on “their pandemic promises to build a more sustainable, resilient and inclusive world”.

This, he said, would include some sort of aligned global industrial policy:

“Supply chain disruptions and labor shortages require appropriate industrial policies to increase the supply of key items in the medium term; this must be accompanied by sustained global policy coordination and (cash) support to help countries finance and manage these changes.

This is unlikely to cause central banks to rethink anything. Their mandates are clear: price stability is the goal, and developing countries will unfortunately have to deal with the fallout. The UN is not known for its expertise in monetary policy.

Despite clear signs of a slowdown in demand for goods and the housing market, other aspects of the US economy remain resilient. Unfortunately, inflation is not falling as fast as the Fed would like. The most recent core PCE reading came in at 4.7% (vs. 4.4% previously), with a strong 0.6% month-over-month gain.

The Core PCE and the Dallas Fed Trimmed Average are two of the Fed’s preferred inflation indicators because they exclude or adjust for the more volatile items (such as food and energy) that are included in the the overall CPI.

As this chart via Credit Agricole below shows, we may have seen the peak, but inflation is still way off target. 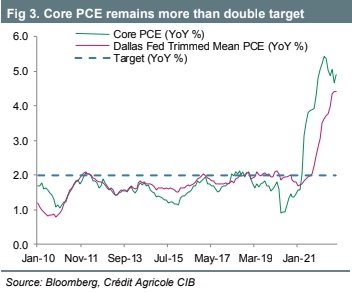 What will change the course of the Fed?

So what does the Federal Reserve need to see to stop the tightening cycle and perhaps even reverse the trend?

Beyond the obvious (less inflation), the central bank wants to see a better balance in the labor market. Specifically, the relationship between vacancies and unemployed. The latest data from the JOLTS survey are encouraging from this point of view. Job postings have fallen by more than a million (!) in the past month, dropping that ratio from just under 2 to 1.7, as shown in the chart below. 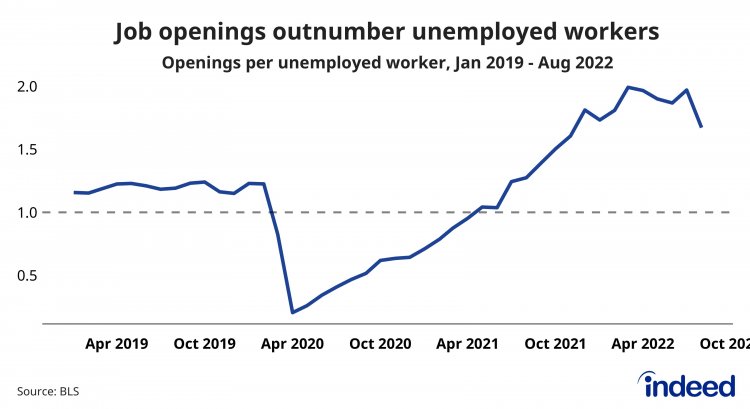 Solid progress, but nothing too exciting for the Fed at the moment. Before the pandemic, a ratio of 1.2 was the norm, layoffs are still low, and the quit rate (an indicator of job change) remains high. However, it adds a bit more context for the non-farm payrolls (NFP) at the end of the week. Aside from the headline figure, keep a close eye on labor market participation.

If more workers return to the job market at a time when vacancies become less plentiful, the rebalancing sought by the Fed could happen faster than expected.

Either way, the Fed is unlikely to pivot and cut rates anytime soon. However, markets are already beginning to price in the growing likelihood of lower interest rates as evidence of the economic slowdown mounts.

As we approach the top of the up cycle, the focus will be on corporate earnings and profit margins. Nike was the latest high-profile retail giant to warn that discounts to eliminate excess inventory and the impact of a strong dollar will weigh on their profits going forward.

It is likely to become a theme…